Highcross Leicester provides open streets and squares centred around a retail core, and a café and restaurant quarter, along with 120 apartments. There are also three major department stores, along with more than 3,000 parking spaces, and new public transport facilities.

Smoke control for the service tunnel

A road tunnel has been built to provide an exit route from the car park. The tunnel is approximately 125m long with the road sloping down towards a central horizontal section and passing under the main retail development.

Due to the single direction of traffic, there is an increased risk that an incident in the tunnel would block traffic flow, meaning that those trapped behind it would most probably have to evacuate on foot, while those ahead of it could continue to drive out of the tunnel. The approach chosen was to use Colt Cyclone fans to stop smoke from flowing upstream and direct it towards the tunnel exit, preventing the smoke from affecting the evacuation of the occupants whose vehicles are trapped.

The alternative would have been to use a ducted extract system from the tunnel, but it was considered that this would not be practical due to the large volume of smoke to be extracted. This chosen smoke control design was modelled and verified using Computational Fluid Dynamics (CFD) to prove its ability to operate against very onerous wind conditions.

The design is based on a two car fire. In fire mode, the ventilation system is designed to move smoke in the same direction as the traffic flow. This means that vehicles downstream of the fire can continue driving, and leave the tunnel. Occupants of vehicles trapped upstream of the fire are protected from the smoke so that they can be evacuated safely, on foot, as necessary. Fire fighters attending the scene can approach the fire in relatively smoke-free conditions to within approximately 10m of the fire location within the tunnel, as required by BS 7346-7, even when there is a significant opposing wind (modelled at 8 m/s) and a smoke from an 8 MW car fire. No extract plant is required. 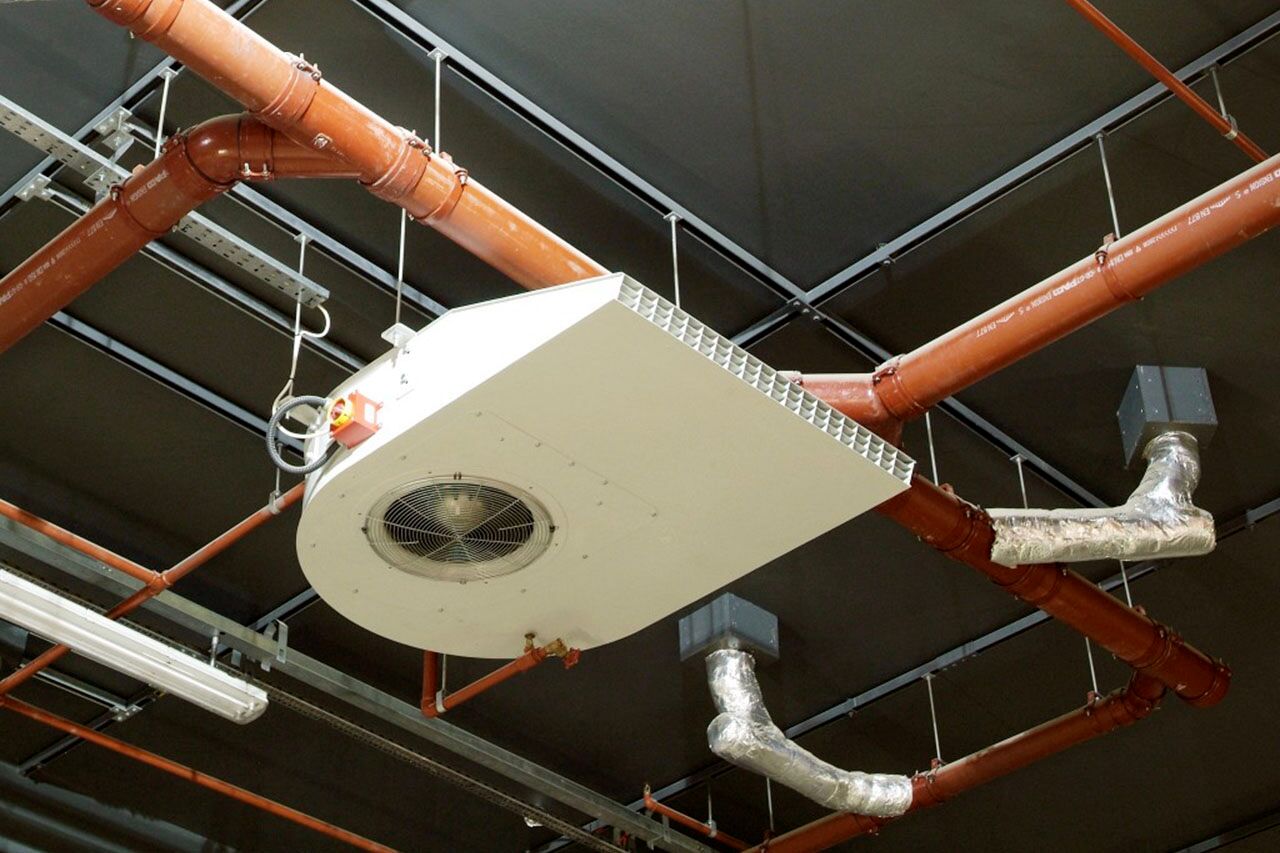 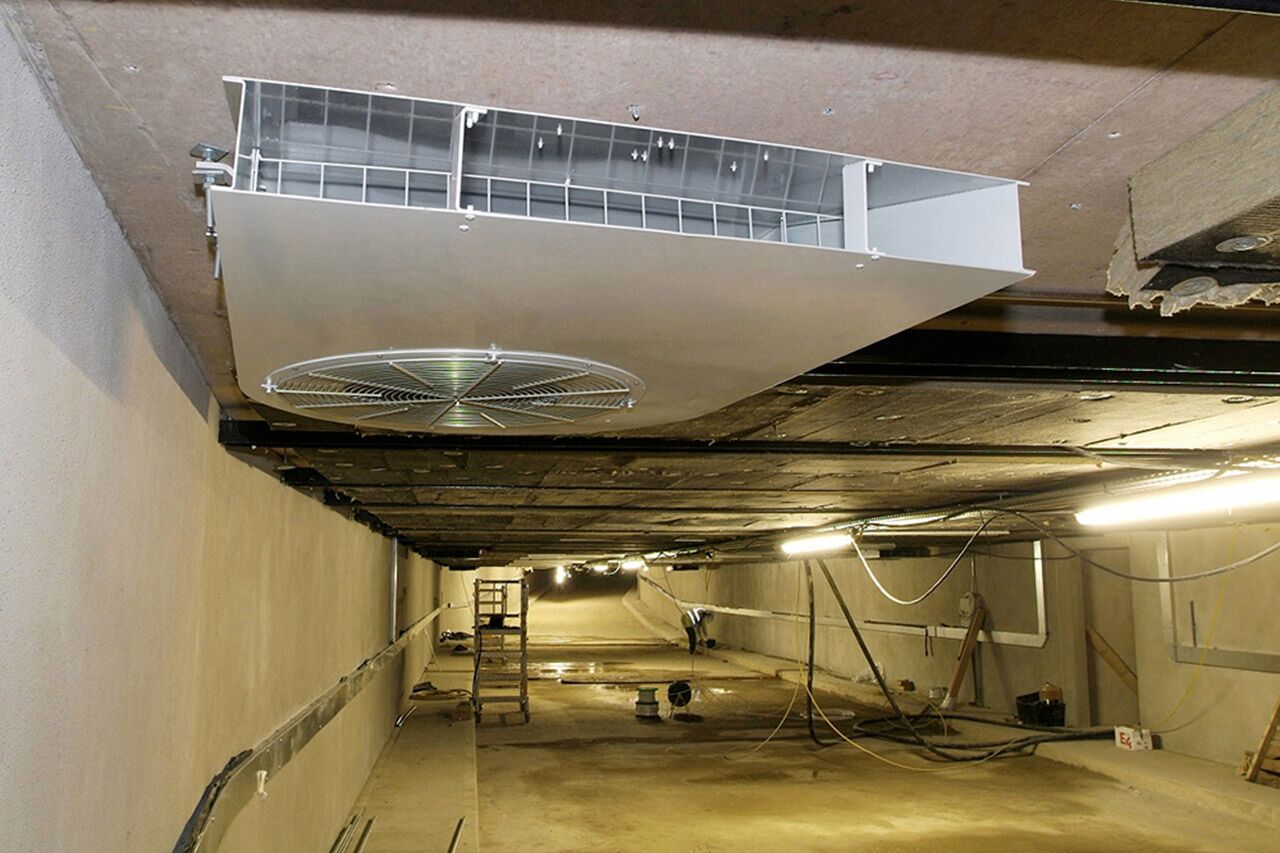 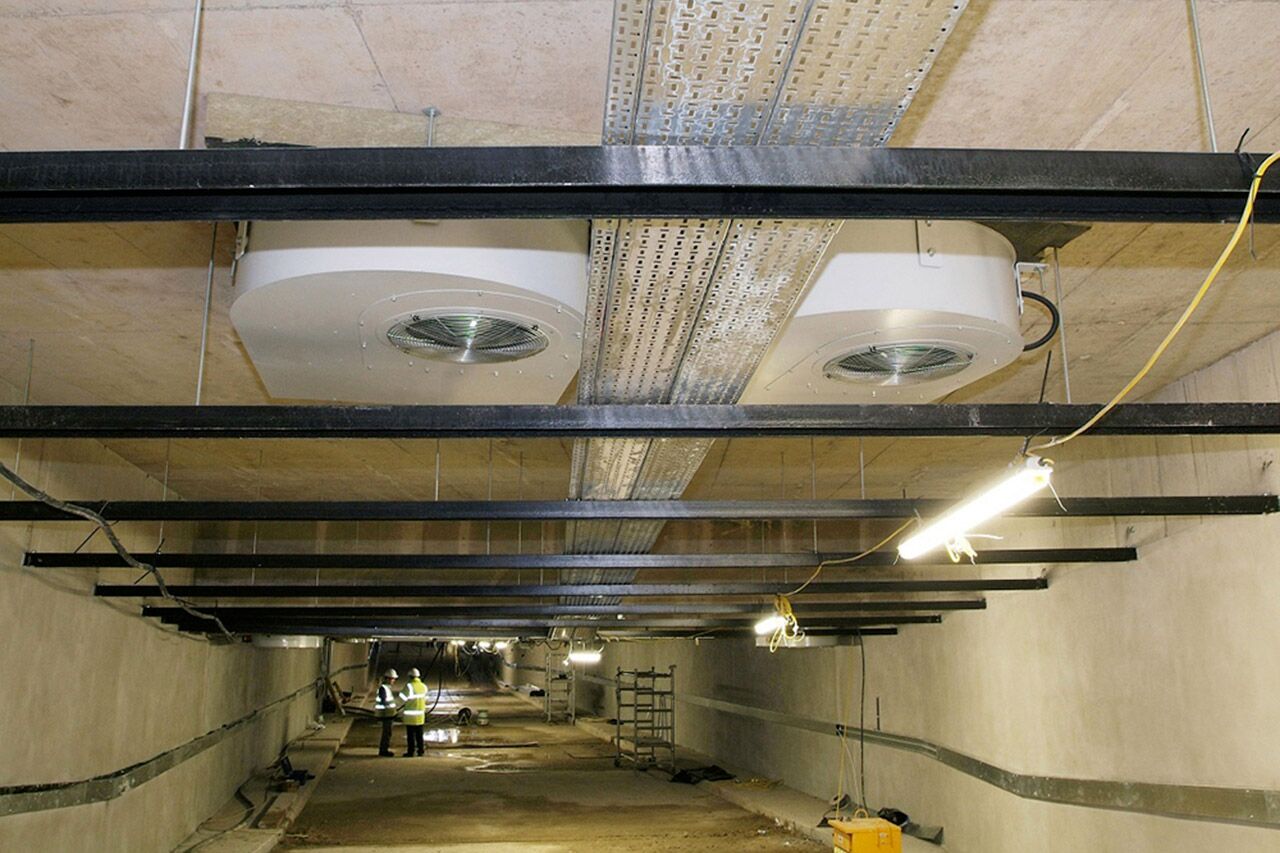 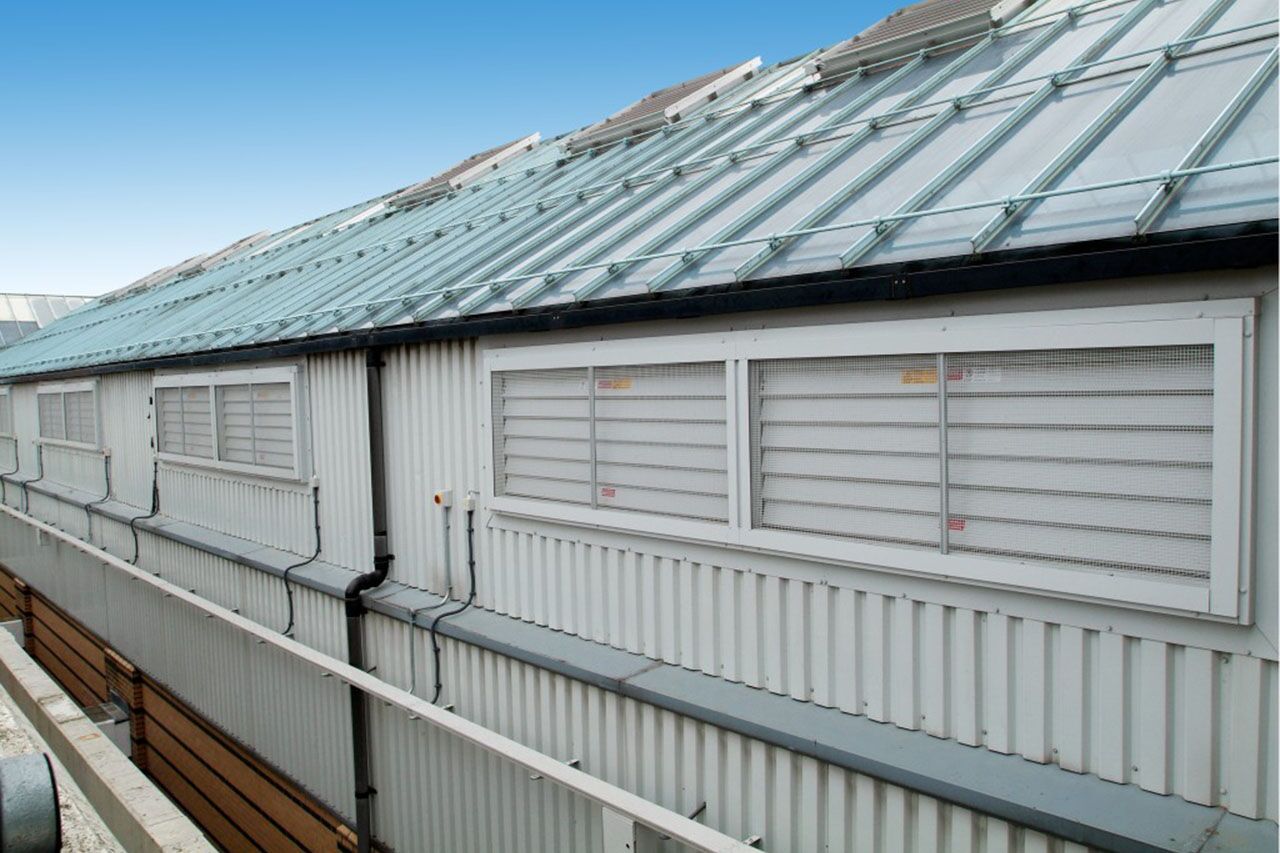 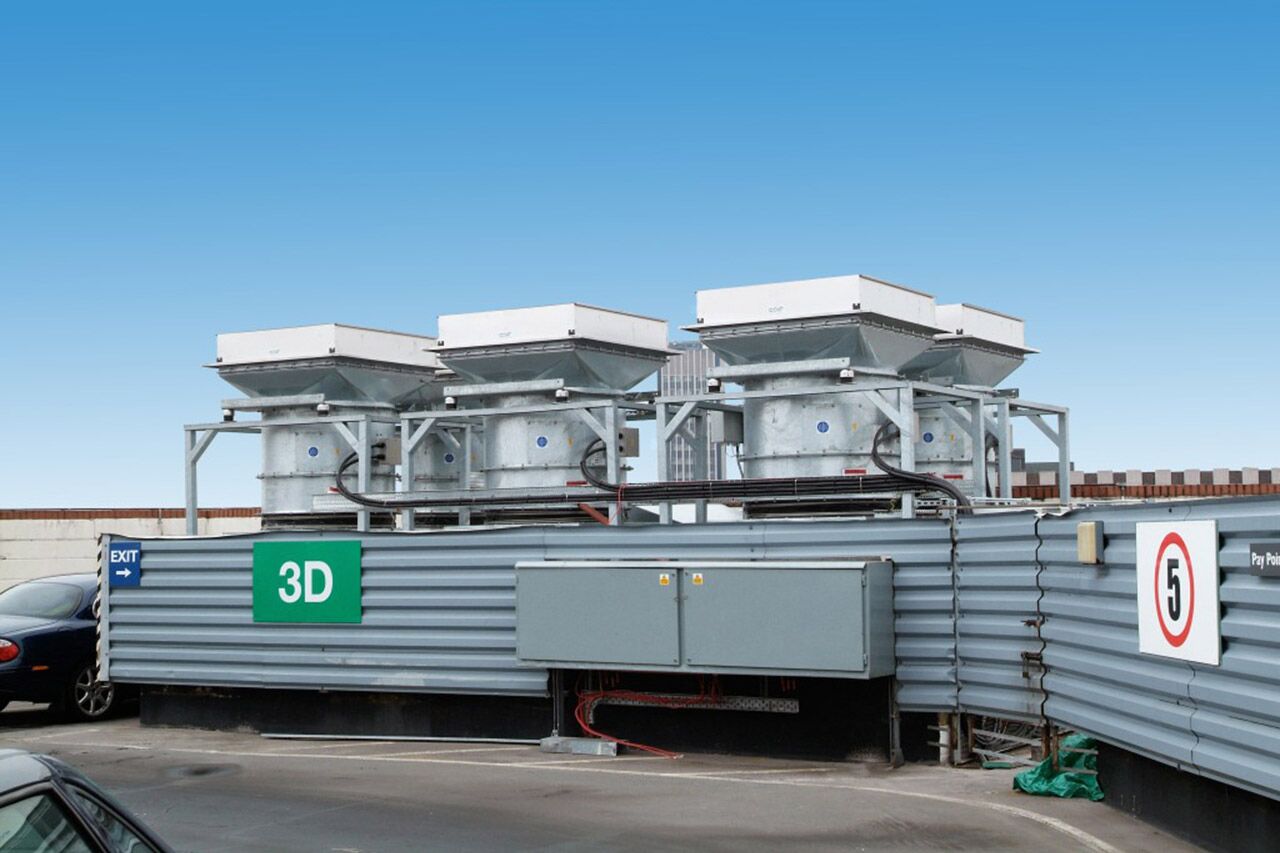 In normal operating conditions the ventilation system will be controlled by carbon monoxide (CO) sensors mounted in the tunnel. When CO levels are minimal, the systems run at low speed to provide a degree of background ventilation. If the CO levels increase, the fan speed will adjust accordingly.

In an adjacent service yard, Colt was able to reduce the number of fans originally detailed, installing a smaller number of more powerful Cyclone fans, to provide a nominal 6 ACH (fume) and 10 ACH (smoke) air change rate, pushing fumes and smoke towards a mechanical extract system.

In the main mall, Colt natural ventilators have been incorporated into the façade, hidden behind a louvre screen provided by Colt.

In the existing mall where the original smoke extract system has been replaced. After investigation, it was found that it was massively under-performing. Colt then provided a scheme of new uprated mechanical extract fans and terminations to this end.

In the apartments adjoining the shopping centre, Colt provided smoke clearance for common corridors and staircases via natural smoke shafts and window actuators.

Highcross provided Colt with the opportunity to bring its full capabilities to bear for all smoke control related elements of the project. CFD modelling has been used to prove complex design strategies such as the tunnel system but also to uncover any design snags, preventing problems in construction and reducing risk for building occupants.