With more than 2,000 spaces, split over a massive 56,000m² on four levels, Colt's system proved the most cost-efficient and effective smoke control solution for this massive area.

The scheme was designed specifically to enable occupants to escape from a car park and to assist fire-fighting crews, rather than simply as a smoke clearance system that is commonly applied to car parks. The reason is that above the car park is Chevasse Park, a green open space, into which the designers weren't permitted to put escape stairs. Therefore extending travel distances were required which in turn required a smoke control system within the car park, which assists both escape and fire-fighting.

A smoke detection system, designed by Colt, pinpoints the location of the smoke and operates fans and dampers according to a set logic. Smoke is driven along a zoned route by a series of aerodynamic dampers, open or closed accordingly to increase smoke extraction.

John Perry, senior consultant at Colt, explained: "Nearly all of the car parks we have done in the UK so far are smoke clearance systems, not smoke control systems. With the former, you have a designated extract rate. This car park is different because it is so large (with the largest level being 232m by 95m) that we have to move smoke from a potential fire into defined corridors. So, this is a fully designed scheme rather than a simple air change rate scheme. We are not merely clearing the smoke - we are controlling it."

Prior to the award of the contract, engineers from Colt and the Building Research Establishment demonstrated the effectiveness of the Colt impulse scheme for the Paradise Street project by conducting a series of hot smoke tests in a simulated car park in Middlesbrough. These established the accuracy of CFD modelling Colt had made before the test, and predicted that the scheme of impulse fans would be capable of controlling the spread of smoke from a car fire and keeping significant areas of the car park smoke free.

Watch the BRE-endorsed video of the tests at Middlesbrough. Throughout the test good visibility was maintained throughout the main area of the rig and the fire remained easily visible for Fire Fighter access. The demonstration showed that impulse ventilation can limit the flow of smoke to a pre-defined area and that properly executed CFD analysis can realistically predict smoke flows and temperatures.

Peter Ryan, Project Director for Laing O'Rourke said: "Colt were involved in the project from the start and throughout the last five years has displayed consummate professionalism and consistent high standards, assisting Laing O'Rourke in the successful completion of Liverpool One."

All the tests prior to handover were successful, with the Colt scheme fully meeting the client's expectations. The design air volume, over 100 m³/sec in places, was achieved at the extract points when the Colt dampers were open, and there was minimal air leakage when they were closed, allowing smoke to move in accordance with the design brief.

This scheme has significantly reduced the required number of stair cores. It has been demonstrated that the fire service access within the building has been enhanced, and low temperatures maintained away from the fire, despite the fact that extract volumes are potentially less than a standard 10 ACH system. 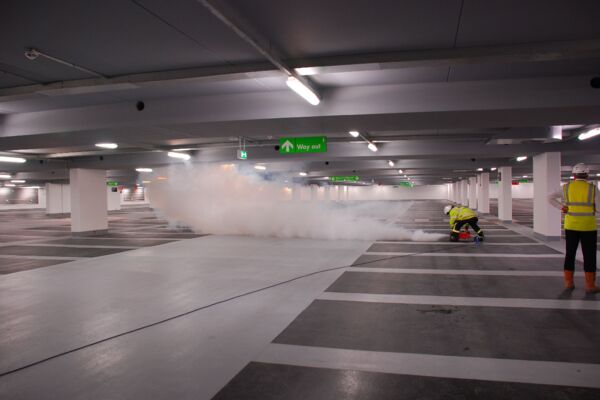 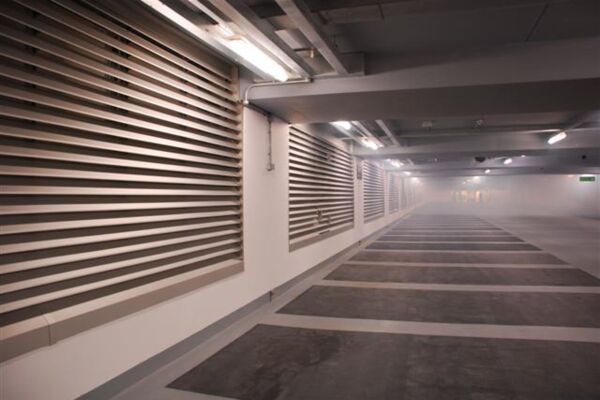 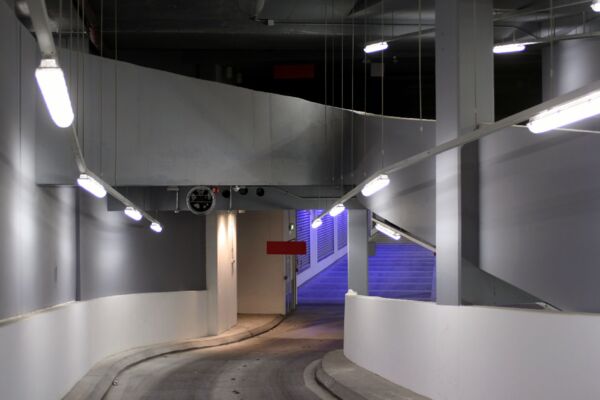 For larger car parks, a 'zonal' system must be used, so that, rather than creating an airflow across the whole width of the car park, the use of selective fans combined with appropriately located extract points enables the spread of smoke to be limited to a particular area of the car park.

It is important for the system to know exactly where the fire is to operate the correct fans and so there is more onus on the detection system.

In a separate contract, Colt also provided a fixed glass and metal louvre system to the exterior. These items provide the ventilation for the car park, but also have an architectural purpose. With the UNESCO World Heritage Site of Liverpool Mercantile City adjacent to the car park, the combination of robust materials and light architectural elements, such as the louvre screens provided by Colt, makes them fit adequately in this context.

Colt's louvre screens feature on the east, north and south facades of the building. The aluminium louvres offer good outward visibility and transparency, provide a significant amount of daylight and the required natural ventilation. The angle of the louvre blades that clad the car park structure differ from floor to floor in order to prevent views in from the street level, and once again to provide natural ventilation. Colt's products have helped to establish the impression of a modern, transparent and light building that is fitting with the high status of the development itself and its environment.